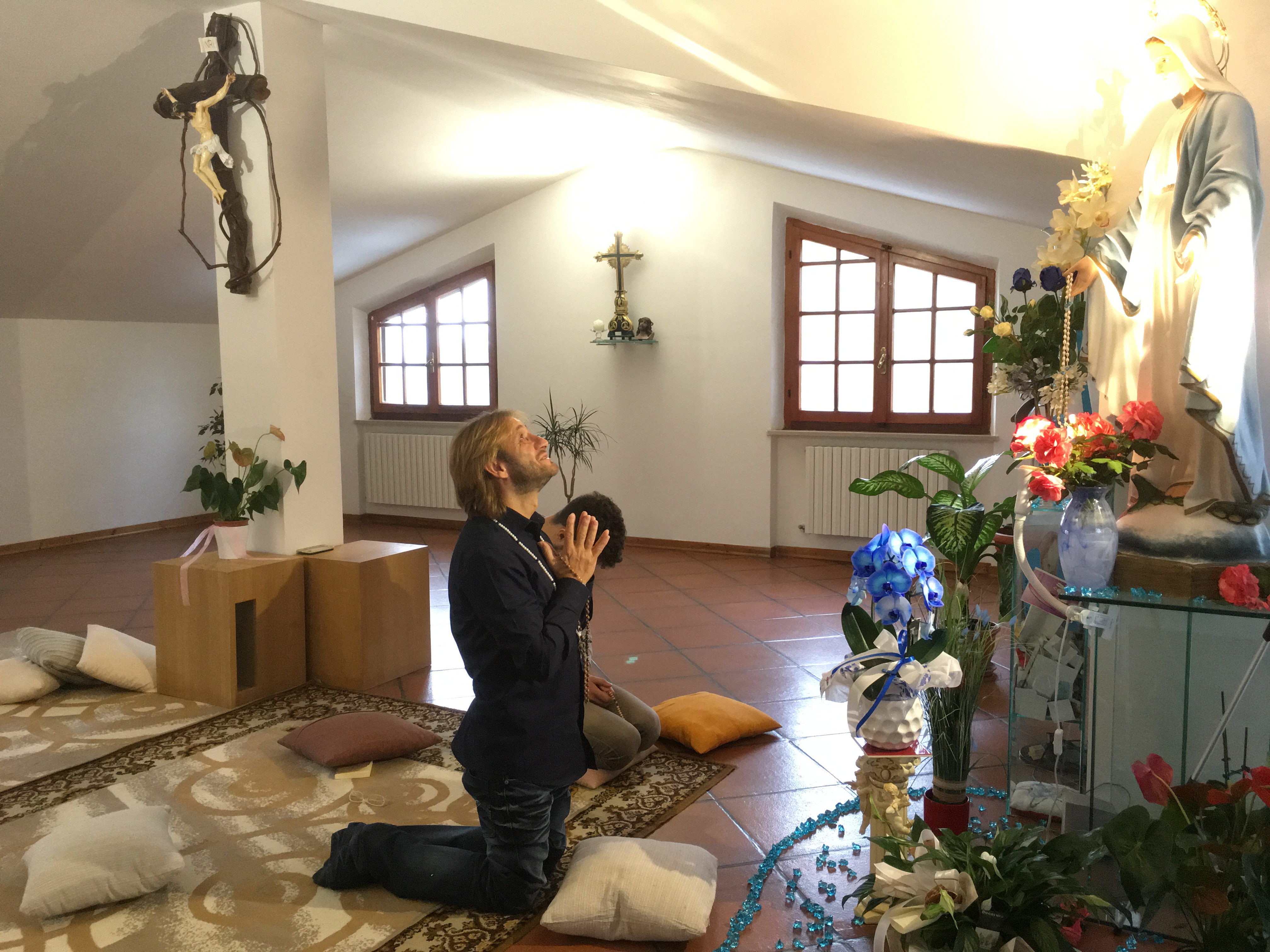 Dear My little children, I’m here among you, so that you learn to know more about the Peace King. My children, I’m inviting you to raise your eyes to Heaven, because the help will come from There and I come onto earth in order to show you the way to Heaven. How many of you wish to meet the Peace King? This is the moment, My children, to decide to follow the ways that God traced out for each of you, so that you can invest for eternity. How many of you ask for prayers and graces, but I’m exhorting you to learn to praise God, so that you learn to recognize His footsteps and, only in this way, you’ll recognize the plans He has for each of you, through the Messages that are given to you. If you don’t live My Messages, you can’t understand these times of mercy and grace, for this reason I’m asking you to help Me. For some time now I’m been asking you to offer Me your hearts in reparation for sins, offenses and outrages that are made. Pray, My children, so that you may learn to love those who around you, without judging. I’m saying to you, My children, be world light always to be merciful through the grace that’s donated to you in the Sacraments! Only in this way, you can fight the evil that attacks you with its seductions every day . And you, who say you love Me, I’m exhorting you to ask for the grace of staying to fix the Cross, so that the Cross may be your salvation for you. From there, My Son gave Me the grace of being your Mother and I, who was in the crowd, I didn’t understand all of this. I heard My Son address the Father shouting “It’s all accomplished!”. My children, I too lived the scene of death and, from there, I realized that death doesn’t exist, but that My Son had fallen asleep and I’m saying to you, My children, not to cry your loved ones, because they’ve fallen asleep and they aren’t dead. For this reason, My children, ask for the grace of abandonment to understand God’s plans. I’m next to you and close to you. Pray, pray, pray, so that I may stay with you long to reveal you the Heaven things, because you aren’t of this world, but you’ve been created for eternity. I’m blessing you all!

A – This Message shines for its classism. It seems a small criticism of the somewhat progressive and euphoric religion of the years 1960-2000. It comes back to what is called the “fundamental” today.
B – The theme of the Cross is very prominent as in the recognized appearances of Kibeho (1981-1989) in Rwanda, first the genocide against the Tutsis in 1994.
C – Here the unpopular theme of redemption and reparation (Paray) reappears, as in Kibeho.
D – The life on earth is short and transitory according to the spirituality of the “Imitation of Jesus Christ”, mentioned in the apparitions of Kibeho. This truth also applies to the love for our dear departed. They are not dead, they are “asleep”.

The Christian vocation is not only to fix the world according to justice and charity. In the end, the Kingdom is not that of the earth. It is the Kingdom of Heaven. Here, the eschatological dimension of the Messages given to the visionary Raffaele Ferrara. On 9 February 1818, the future Saint John-Mary arrives at Ars. It mists. The young priest is lost. He does not know where the Garets castle is located. He does not find his Parish:
In the meadows there were some children grazing their sheep, and Father Vianney walked over to them … He had to repeat the same question several times. Finally the most intelligent, a certain Antony Givre, put those strangers back on track. “My little friend,” the priest said to him, thanking him, “you’ve taught me the way to Ars and I’ll teach you the way to Paradise.”
Today a monument, at the border of the village commemorates this event so significant of the vocation of the Church, of the Priest and of the Christian life.
(François Trochu – “The Curé of Ars” – Marietti 2009, page 151).
We find the same teaching in the message of October 2018!

Close Menu
Send this to a friend